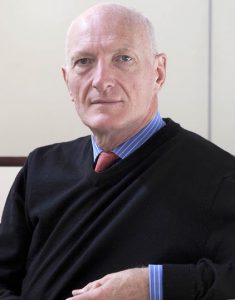 His love of knowledge continued, as he lectured young minds in Latin and Classi-cal Studies, before continuing his studies at Oxford on a Rhodes Scholarship. A BA in Jurisprudence and the BCL, with hon-ours and prizes.
Cameron received his LLB from the Uni-versity of South Africa, and received the medal for the best law graduate.

He practised at the Johannesburg Bar from 1983 to 1994. From 1986 he was a human rights lawyer based at the Universi-ty of the Witwatersrand’s Centre for Ap-plied Legal Studies (CALS), where he was awarded a personal professorship in law. His practice included labour and employment law; defence of ANC fighters charged with treason; conscientious and religious objection; land tenure and forced removals; and gay and lesbian equality.

From 1988 he advised the National Union of Mineworkers on AIDS/HIV, and helped draft and negotiate the industry’s first comprehensive AIDS agreement with the Chamber of Mines. While at CALS, he drafted the Charter of Rights on AIDS and HIV, co-founded the AIDS Consortium (a national affiliation of non-governmental organizations working in AIDS), which he chaired for its first three years, and founded and was the first director of the AIDS Law Project.
He oversaw the gay and lesbian movement’s submissions to the Kempton Park negotiating process. This, with other work, helped secure the express inclusion of sexual orientation in the South African Constitution.

In September 1994, he was awarded silk (senior counsel status). President Mandela appointed him an acting judge and later a judge of the High Court. In 1999/2000 he served for a year as an Acting Justice at the Constitutional Court. In 2000 he was appointed a Judge of Appeal in the Supreme Court of Appeal. He was appointed a Justice of the Constitutional Court in 2008, till his retirement last year. He accepted the position of Inspecting Judge for the Ju-dicial Inspectorate for Correctional Services and commenced duty on the 6th January 2020.
Prior to his arrival at JICS, he was actively involved in visiting correctional centres. To highlight one, Cameron and a team of law clerks from the Constitutional Court con-ducted a visit of the Pollsmoor Correctional Centre on the 23rd April 2015 in terms of section 99 of the Correctional Services Act. This visit and subsequent report was in-strumental in highlighting the plight of inmates at Pollsmoor and eventually led to the Saldanha Ruling in 2017 and the reduction in remand detainees at Pollsmoor.